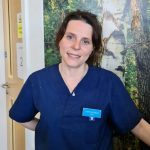 Katerina Balani started the Dental School of Aristotle University of Thessaloniki (Greece) in 1996 with a scholarship, she was first in the rank of her year with the highest marks between all successful students.
She earned a scholarship for 3 years in a row and graduated in 2001, with the 3rd highest marks of her year.

In 2004, she additionally completed the 3 years postgraduate program (Master’s degree) in Periodontology and Biology of Implants in Aristotle University.

Since then, she attended multiple courses mostly in Periodontology and Endodontics, but also in Aesthetic Dentistry.

In 2012 Katerina came to Scotland and since then she has worked as a General Dental Practitioner.

She still maintains her special interest on Periodontology and Endodontics and she attends multiple postgraduate training courses.